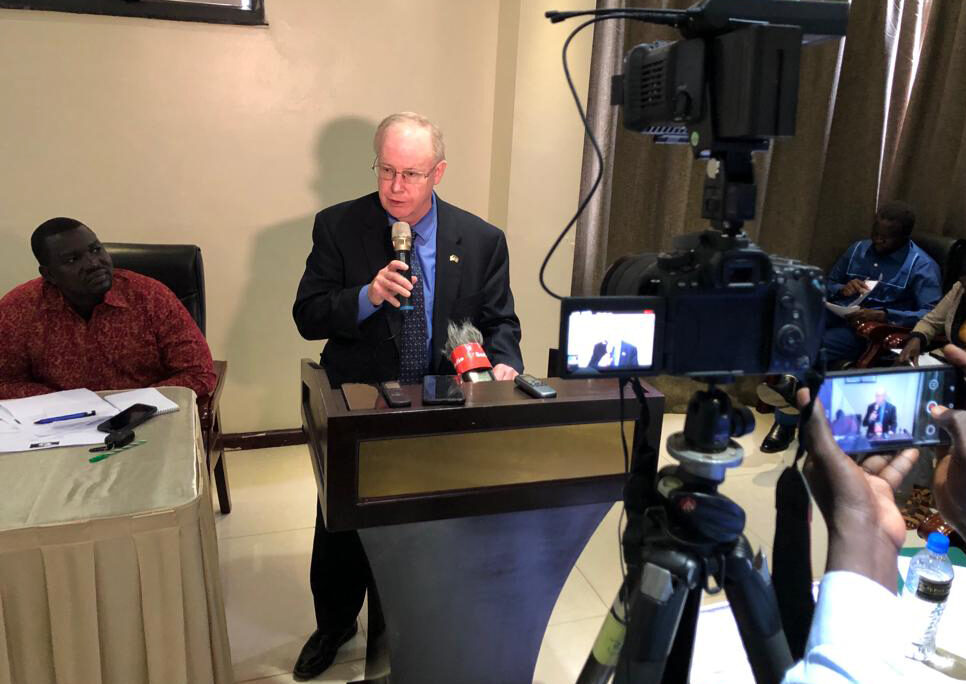 As Prepared for Delivery

It’s an honor for me to speak to this distinguished group about the importance of media to a healthy democracy.

Friends, let me begin with an issue that is on the minds, if not the lips, of many people, here in South Sudan and abroad.  An issue with tremendous implications for the future of this country.

South Sudan stands at a crossroads.  The 2018 Revitalized Peace Agreement – on which South Sudanese have pinned their hopes of a peaceful transition to democracy, economic opportunity, and prosperity – expires in just nine months.  Yet the necessary unified forces still have not graduated, security laws have not passed, the drafting of a permanent constitution awaits legislation defining the process, and key election law amendments will not even be drafted until the National Constitutional Amendment Committee is reactivated.  All of this was to be underway before the Revitalized Transitional Government of National Unity was formed, two and half years ago.  All of this must be accomplished before the people of South Sudan can meaningfully discuss the prospects for elections.  Elections that President Kiir told the legislature last August must be “free, fair, and credible democratic elections.”  So much remains to be done.

The times cry out for a national conversation about how to realize the promise of R-ARCSS.  About how to hold political leaders to the commitments they made when they signed the peace agreement.  I believe that conversation is already happening, but quietly, privately, in homes and in villages, in churches and in mosques, in WhatsApp discussion groups, behind closed doors in universities, think tanks, business organizations, and yes, in media houses like those represented here today.  And it’s happening against a background of violence and intimidation affecting nearly every state in South Sudan.

World Press Freedom Day is an occasion to assess the state of press freedom, protection of journalists, and citizens’ rights to unbiased, accurate information.  It’s a day to recognize the courage of journalists and remember those who have been harassed and intimidated, detained, kidnapped, tortured, or killed for simply doing their jobs.  Sadly, we’re reminded what a dangerous, yet noble, profession journalism is.  The Committee to Protect Journalists reports that last year set a new record for the number of journalists arrested and killed worldwide:  293 behind bars, 28 murdered.  We were reminded this morning of journalists in South Sudan who were killed doing their jobs.  Today, we honor their sacrifices, as well as the work of the National Press Club of South Sudan and other advocacy groups, in defending the rights of journalists and the freedom of the press in South Sudan.

Journalists are indispensable to democracy, here in South Sudan and across the world.  Indeed, freedom of the press is the lifeblood that makes democracies vibrant.  That’s why the United States invests in the capacity of South Sudanese journalists by supporting community-based radio stations, and the National Press Club, the Association for Media Development in South Sudan (AMDISS), and other journalist advocacy organizations.

Thomas Jefferson, our third president and our first Secretary of State, wrote in 1786, “Our liberty depends on the freedom of the press, and that cannot be limited without being lost.”  Article 24 of your Constitution proclaims “Every citizen shall have the right to the freedom of expression… all levels of government shall guarantee the freedom of the press and other media…”  Are these freedoms, guaranteed by your constitution, being respected in South Sudan?

The facts on the ground say otherwise.  The government actively censors the press.  Radio stations are routinely shut down.  Journalists are asked not to cover certain topics, including corruption.  Journalists have had to flee and go into hiding because they have dared to report the truth.  Let me cite just a few examples; I’m sure many of you can cite several others.

Earlier this year, a journalist with Eye Radio was kidnapped and is only alive today thanks to a harrowing escape.  On February 22, eight journalists were detained for covering a press conference at the parliament that opposition members of parliament had invited them to attend.  When the Juba Monitor was preparing to go to press with an article about their detention, security agents showed up at the printing plant and forced the paper to spike the story.  What is especially disappointing, but perhaps not surprising, is that a TNLA spokesman defended the arrest of those journalists.  Government security personnel removed dozens of articles from the Juba Monitor newspaper, and suspended its operations on March 17, according to the newspaper’s editor.

We know the government has freely used the powers of the state to act against those it deems a threat.  The Sudd Institute was closed for more than three months, from August to November of last year, until a government investigation found no links between the Institute and the People’s Coalition for Civil Action.  Groups that openly advocated some of the more controversial proposals of the National Dialogue had their assets seized while their leaders were forced to leave the country.  And just last week, the Ministry of Foreign Affairs summoned the Kenyan Ambassador to protest the airing on Kenyan television of remarks critical of President Kiir by a South Sudanese critic.  Minister of Information Michael Makuei issued a chilling warning to media houses here against carrying information critical of another foreign country.  Earlier this month, VOA quoted Minister Makuei as saying that “South Sudan is the only place where journalists are free, where they enjoy absolute freedom, according to the law.  I say, ‘according to the law,’ because there is nothing absolute in this world.”  His comment was a not-so-subtle reminder to journalists to not “cross the line” by reporting on things that will get them in trouble.

I’m sure some of the journalists here have been in situations where they wrestled with the question of whether to pursue a story that they knew might land them in trouble and decided it just wasn’t worth taking that risk.  That’s what the government wants to see happen.  It’s easier to get journalists to censor themselves than it is to send security personnel to a newsroom to kill an article.

It’s no surprise, then, that South Sudan does poorly in international press freedom indices, where it lags behind many other countries in the region.  South Sudan ranked 128th out of 180 countries worldwide, according to the latest index from Reporters Without Borders.  By comparison, the only countries in the region with lower scores are Uganda (number 132), Sudan (number 151), and Eritrea (number 179).  Freedom House, the oldest American organization devoted to the support and defense of democracy around the world, ranks South Sudan as “not free,” rating it only one out of 100, and minus three on the scale of political rights.  By comparison on the same scale, the Central Africa Republic is rated #7, Sudan rated #10, the Democratic Republic of the Congo, #19, Ethiopia, #23, Uganda, #34, and Kenya, #48 out of 100.

No doubt, the government will deny that it censors the press and will object to these benchmarks.  But the facts speak for themselves.  These are not the hallmarks of a country that respects freedom of speech, freedom of assembly, or freedom of the press.  This is not a country with open civic space.

South Sudan faces momentous decisions about its future.  Especially now a free press is needed to report the news and to serve as a platform for the robust exchange of ideas and debate.  Unrestricted dialogue is the only way to forge a national consensus on South Sudan’s future.  At this critical point in your history, I call on the Media Authority to redouble its efforts to ensure journalists can perform their responsibilities in a safe, protected environment.  I urge all sectors of society to support the nation’s media organizations in their struggles against censorship, intimidation, unlawful arrests, and extralegal suspension of independent radio stations.

Thank you to all journalists and media workers for your commitment to freedom of expression and to the right of every individual to seek, receive, and impart information and ideas of all kinds.  Know that the people of the United States and their government stand with you to protect and promote your freedom to give voice to the people of South Sudan.  I look forward to seeing the recommendations that will be developed during today’s workshop.