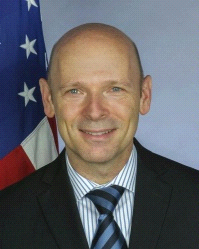 Thomas Hushek Recently served as Acting Assistant Secretary for the Bureau of Conflict and Stabilization Operations (CSO). A career Foreign Service Officer, Mr. Hushek also served as Deputy Chief of Mission at the U.S. Mission to the International Organizations in Vienna from 2013 – 2015 and at the U.S. Embassies in Dushanbe, Tajikistan, (2006 – 2008), and Kolonia, Micronesia (2002 – 2004). He has had several assignments in or focused on Afghanistan, as the Director for International Narcotics and Law Enforcement in Kabul (2012 – 2013), the Senior Civilian Representative at the Herat Provincial Reconstruction Team and Regional command West (2004 – 05), and as Afghan Refugee Coordinator in Islamabad and Kabul (1999 – 2002). Mr. Hushek’s early diplomatic postings included Khartoum and Moscow.

At the Department of State in Washington, Mr. Hushek has served as Director for Europe, Central Asia, and the Americas in the Bureau of Population, Refugees, and Migration (2010-2012) and Director for Central Asia in the Bureau for South and Central Asian Affairs (2008-2010). He also served as Afghanistan/Pakistan desk officer (1997-1999). Other Washington assignments include the Office of the U.S. Trade Representative and the Department’s Bureau of Democracy, Human Rights, and Labor.