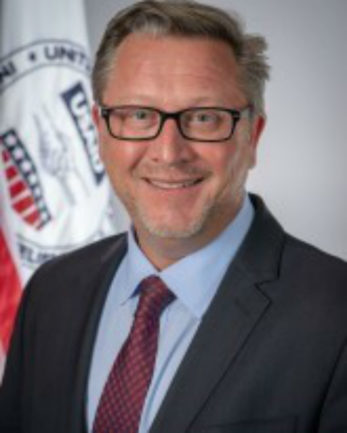 James Hope was sworn in as Mission Director for South Sudan in August 2018. He previously served as USAID’s Mission Director in Kosovo from November 2014 to July 2018. Mr. Hope is a Senior Foreign Service Officer with more than 20 years of experience working for USAID on international development programs.

Mr. Hope previously served as Deputy Mission Director at USAID/Afghanistan from October 2013 to October 2014 and as Deputy Mission Director at USAID/Kenya (2008-2013), helping oversee a program focused on Presidential and USAID initiatives including Feed the Future, the President’s Emergency Plan for AIDS Relief (PEPFAR), and the Horn of Africa Joint Planning Cell on drought resilience. In 2007-2008, he headed the Provincial Reconstruction Team Office at USAID/Afghanistan, responsible for civil-military cooperation with U.S. and NATO military partners. Earlier, he served at USAID/Indonesia (2001-2007), where he led a Presidential initiative to improve basic education and worked on tsunami recovery.

Before joining USAID’s Foreign Service in 2000, Mr. Hope worked as a Program Officer at USAID/Bosnia (1995-1999) supporting implementation of the Dayton Peace Accords, and at USAID/Poland (1994-1995) supporting Poland’s transition to democracy and economic reform process.

Mr. Hope was born in New York, grew up in Boston, and currently calls Austin, Texas home. He received a Bachelor’s degree in history from American University and a Master’s degree in Russian and East European Studies from Yale University. He speaks Polish. He has a daughter, Katherine.