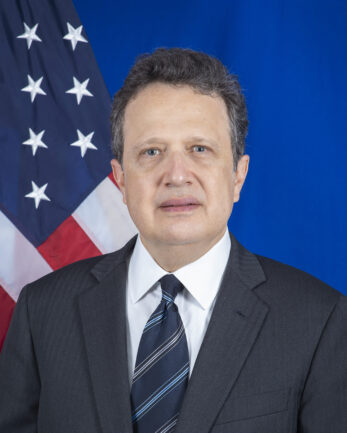 Michael J. Adler is the fourth United States Ambassador to the Republic of South Sudan.  He arrived in Juba on August 23, 2022 and presented his credentials on August 24.  A career Foreign Service Officer who joined the Department of State in 1992, Adler served from 2019-2021 on the White House National Security Council staff as the Deputy Senior Director for South Asia and as Director for Afghanistan.  Prior to that, Adler served as the Acting Deputy Assistant Secretary for South and Central Asian Affairs and as Director of the Office of Afghanistan Affairs.

His overseas assignments at U.S. Embassies have included Deputy Chief of Mission in Kuwait and Lebanon, Political Counselor in Afghanistan, Deputy Political Counselor in Iraq, and postings in Bosnia and Herzegovina, France, and Qatar.  He served with the Coalition Provisional Authority in Baghdad and Najaf and at the U.S. Mission to the United Nations in New York.

Prior to joining the Foreign Service, Adler lived in Nigeria and worked for the U.S. Agency for International Development, including in South Africa.  He has received multiple State Department performance awards, the Secretary of Defense’s Meritorious Civilian Service Award, and the Spanish Order of Civil Merit.