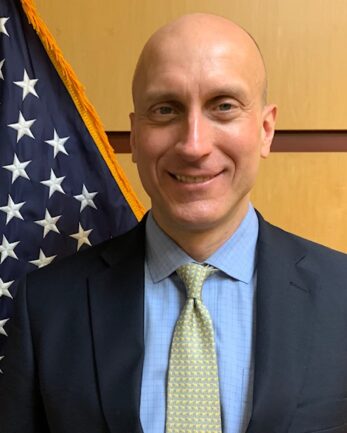 William Flens arrived in Juba, South Sudan, February 4, 2022, to begin his assignment as Deputy Chief of Mission (DCM) at U.S. Embassy Juba.  On June 4, Mr. Flens assumed duties as Chargé d’Affaires, ad interim (CDA, a.i.).  CDA Flens served most recently as the Director of the Office of Multilateral Affairs in the Bureau of East Asian and Pacific Affairs (EAP) at the U.S. Department of State, where his work focused on the Association of Southeast Asian Nations (ASEAN), the Mekong subregion, and the South China Sea.  Previously, he served as the Counselor for Political and Economic Affairs at the U.S. Embassy in Rangoon, Burma. Other overseas tours include China, Afghanistan, Thailand, and Ethiopia.  He has also worked as the Deputy Secretary’s special assistant covering EAP and as the bilateral unit chief on the China Desk.

Prior to joining the Foreign Service, CDA Flens worked on African defense policy issues in the Office of the Secretary of Defense and before that, as a Presidential Management Fellow at the Voice of America.  He served as a Peace Corps Volunteer in then-Zaire and in the Republic of Congo-Brazzaville.  CDA Flens is a Chicago native and a graduate of the Fletcher School and Loyola University Chicago.