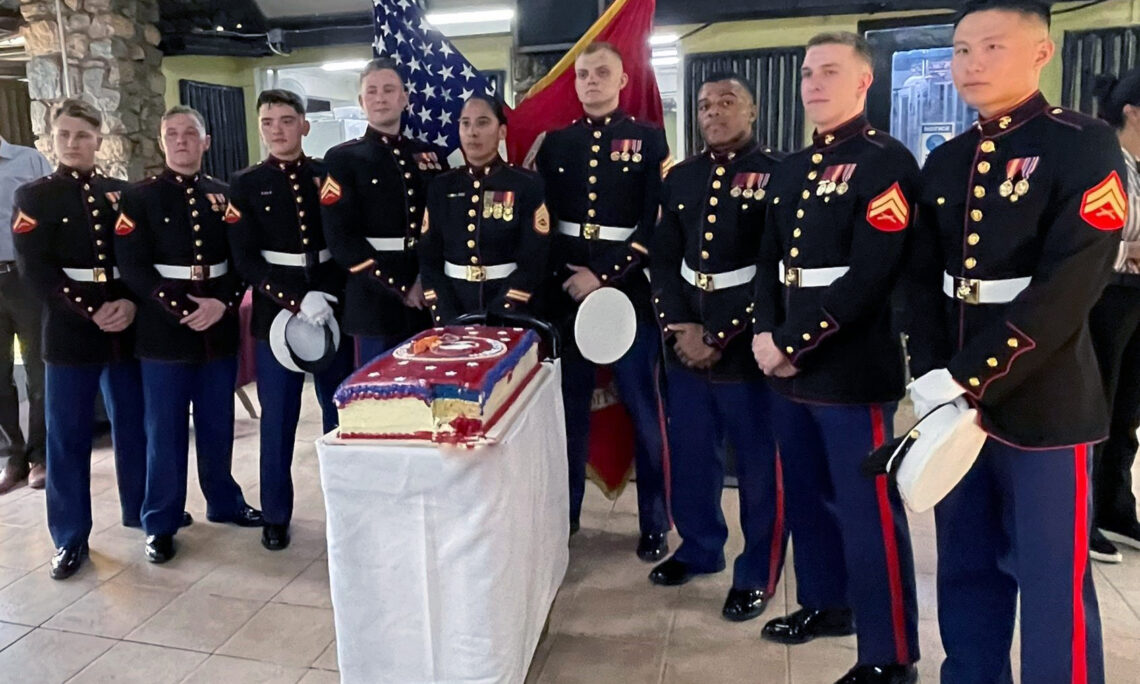 Eternal vigilance is the price of freedom.

For 246 years, the United States Marine Corps has stood in the vanguard of our nation’s forces, defending us from all those who would seek to deprive us of the blessings, liberties, and freedoms that have enabled our great nation to grow and flourish, to become a beacon of hope throughout the world, including here in South Sudan.

246 years.  Some of you may recall that only a few months ago, we celebrated our nation’s 245th birthday.

Indeed, the Marines were there from our very beginning, fighting to secure the birth of our nation.  It was the Second Continental Congress that resolved on November 10, 1775, to raise two battalions of Marines.  Nearly eight months before our Declaration of Independence.  In one sense, we owe our very existence as a nation to the Marines.

As our young nation established itself in a world ruled by empires, the Marines remained vigilant protecting our freedoms.  They helped secure the sea lanes against Caribbean privateers and Barbary Coast pirates along “the shores of Tripoli.”

In the War of 1812, when England sought to crush the upstart nation that had the temerity to challenge a great empire, our Marines stood strong against them in naval operations too numerous to name, in the defense of Washington at Bladensburg, Maryland, and alongside Andrew Jackson in the defeat of the British at New Orleans.

We know only too well that war comes not when the forces of freedom are strong, but when they are weak. It is then that tyrants are tempted.  Ronald Regan, 1980

Marines are warfighters.  Throughout our history, the Marines have answered the call to defend our freedoms and protect the values that define us as a nation.  The message we just watched highlights many examples, and others who speak today will pay tribute to many more.

Marines are warriors, but they are not defined by war.  Their eternal vigilance keeps freedom strong.  Their creed is honor, courage, commitment.  Semper Fidelis is their motto, but it is so much more.  For Marines are truly, always faithful, faithful to the people of the United States, to the nation the people created, to the men and women with whom they serve, who are the Marine Corps.

Americans are a generous people, prepared to defend the weak, protect the vulnerable, and assist those in need, whether at home or abroad.  Here too, Marines are in the vanguard projecting American values throughout the world.  From earthquakes in Haiti to tsunamis in Indonesia, U.S. Marines played a vital role supporting relief operations.  They conducted humanitarian and disaster relief operations during 1998 in Kenya, and in the Central American nations of Honduras, Nicaragua, El Salvador, and Guatemala. The Marines also serve the American people at home, helping fight wildfires, and responding to disasters like hurricane Katrina.

“To be prepared for war,” George Washington said, “is one of the most effective means of preserving peace.”  In President Regan’s words, “Peace through strength.”

Throughout the world, and here in South Sudan, the United States seeks to promote freedom and protect basic human rights, to secure for all the blessings of peace and the prosperity only peace can bring.  Of the “3Ds,” defense is only one.  It partners with diplomacy and development to promote and protect or national interests.

Those of us here today know the long history of war that has beset the people of South Sudan, from their decades long fight for self-determination and independence, to the violent upheaval of civil war.  We are here today as a friend, to help this nation heal, to protect the vulnerable displaced by floods, food insecurity, and conflict.  We are here to promote peace.

We are here, standing side by side with the dedicated men and women of our Marine Security Guard Detachment, ably lead by Gunnery Sargent Magana.  As we work for peace and development, we depend on the strength of the Marines, not just here in Juba, but throughout our troubled world.

Over the past few weeks, Marine Security Augmentation Units, MSAUs, have deployed to our embassies in Addis Ababa and Khartoum to protect our diplomats as they work to promote the peaceful resolution of the conflicts in Ethiopia and Sudan.  Our work here in Juba, a High Threat – High Risk post, is possible because we too can call on MSAU support and the support of the East African Response Force if the need should arise.

We work in a world where terrorism is an ever-present threat to America and to the men and women of our embassies that represent her.  In recent weeks, ISIS claimed responsibility for attacks in Kampala, reminding us we live in a dangerous neighborhood.  It is a risk we assume, knowing our MSG detachment plays a central role protecting us from that threat.

The Marines – these Marines – our Marines – are partners in the task of eternal vigilance that protects our freedoms. Their strength is our peace.

We are honored to serve with them.